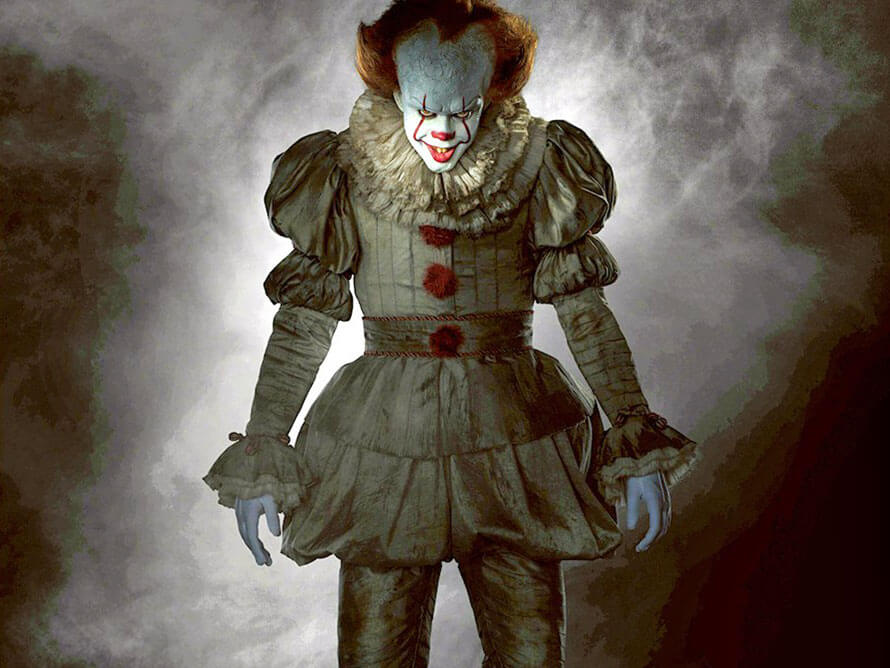 Clowns are supposed to be funny. We’ve all seen clowns at the circus or carnival, or entertaining kids at a party. They wear funny costumes, giant shoes, colorful wigs, and cheerful makeup. They do magic tricks and carry huge bouquets of floating balloons. Sounds innocent, right? But some people find clowns to be just as scary as ghosts, vampires, or other monsters. In fact, some are more frightened of clowns than of any mythical demonic beast — a fear so common it has its own name: coulrophobia.

We’re not going to deny that some clowns are meant to be scary. There’s something uniquely Halloween about taking a goofy, harmless clown and turning it demonic. Some of our horrifying clown masks can attest to that. We have some of the most evil-looking clowns from Hell that you’ll ever see (and considering how scared some people are of clowns, you’re likely to get lots of shudders at your next Halloween party if you pick one up).

But what about perfectly “normal” clowns (as normal as a clown can be, anyway)? Why are some people so deeply afraid of something meant to portray childish fun and comedy? To find that out, we’ll have to dig into the most frightening place in existence: the human mind.

Humans have survival instincts just like every other creature, and those instincts cause us to be extremely wary of anything that seems out of place. It’s been theorized that clown makeup and prosthetics look just human enough, and simultaneously just alien enough, to put our minds into a state of confusion that alerts our fears. Clowns look human and inhuman at the same time, which many people find disturbing on a psychological level.

The way clowns act also affects these instincts, since they often break social conventions through weird behavior. The fact that it’s part of an act doesn’t matter to our subconscious minds. Clowns also prefer physical, slapstick comedy which involves a lot of movement that comes across to some people as dangerous or aggressive. They also use props that surprise onlookers, and some people just don’t like to be startled, even by a squirting flower. While an adult might only find this annoying or distasteful, children are far more impressionable and sensitive, so they can be traumatized at an early age by perfectly innocent clown interactions. Most adults with a fear of clowns can trace it back to being frightened by them during childhood.

The Birth of the Evil Clown

Since people find clowns so unsettling, it was only natural that dark and sinister clown characters would be developed. After all, that’s what horror creators do: they find something people are already afraid of and make it even scarier. So as the fear of clowns became more well-known, evil clowns began to enter pop culture.

More historically-inclined horror fans will know that evil clowns showed up as far back as the 16th century in the form of wicked trickster characters like Harlequin and Pierrot. In the 1800s, an evil clown made an appearance in the works of Edgar Allan Poe. In the 1970s, the evil clown became a reality for the first time when it was discovered that serial killer John Wayne Gacy would dress up as a clown named Pogo for local children’s events (and while he didn’t kill anyone in his clown persona, it certainly didn’t help matters). Then in the 1980s, the evil clown turned into a pop culture icon with the introduction of Pennywise, the terrifying demonic clown from Stephen King’s It.

Today, there are evil clowns all throughout media, and they’re popular in horror movies as well as other franchises (like the Joker in the Batman comics and films). Evil clowns are in the music business, represented by Insane Clown Posse and related acts. There are even villainous clowns in professional wrestling. It seems that as frightened as we are of them, we can’t get enough.

So, if you want to scare the maximum number of people this Halloween, an evil clown costume is the way to go. If you look at our clown masks, we have a huge range of disturbing clown characters as well as famous evil clowns from movies, like the aforementioned Pennywise and several versions of the Joker. We also have masks from The Devil’s Rejects, Killer Klowns from Outer Space, and even a mask representing John Wayne Gacy’s Pogo the Clown persona. We’re sure you’ll find something here on Halloween-Mask.com that will be perfect for bringing your own special brand of coulrophobia to your neighborhood!